The East Bay, including Berkeley, is traditional Lisjan Ohlone land. Following the Spanish missions, which stole Ohlone land and enslaved the Ohlone people, the land on which Berkeley stands was granted to Spanish Army sergeant Don Luís María Peralta in 1820, and then subsequently subdivided and sold off.

The map below from 1909 shows the Northbrae Properties subdivision in the Berkeley Hills. (source) This subdivision was one of a number of tracts of land in the Bay Area bought and developed as a set of private residential parks, and marketed and sold by the Mason-McDuffie Company. 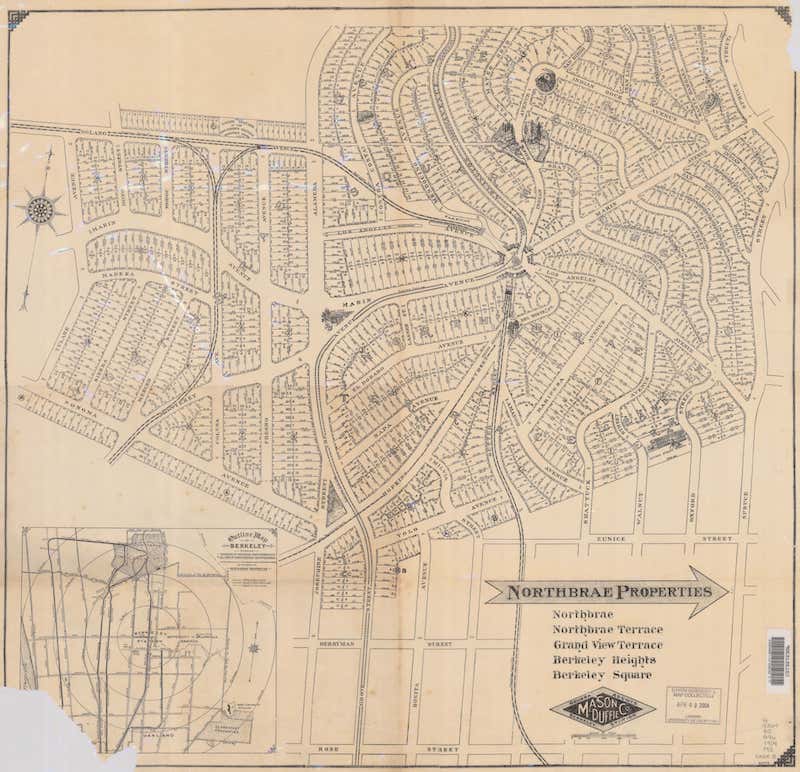 These developments were conceived through the vision of Duncan McDuffie, who helped establish the California State Parks and the East Bay Regional Park systems, and was twice president of the Sierra Club. McDuffie’s companies developed substantial parts of the East Bay and San Francisco.

However, in line with standard practice at the time, homes in these developments were sold only to white buyers, enforced as part of the sales process through restrictive covenants. The Mason-McDuffie Co. covenant states as its final condition: “if prior to the first day of January 1930 any person of African or Mongolian descent shall be allowed to purchase or lease said property or any part thereof, then this conveyance shall be and become void….” [3]. Covenants also forebade the construction of anything other than single-family properties on Mason-McDuffie residential developments.

Such covenants were limited in term, and could not control what happened outside the boundaries of private residential developments. Thus public zoning ordinances, first deployed in Los Angeles, were adopted by Berkeley to help maintain racial residential segregation in the face of these and other limitations of restrictive covenants (see [1]).

As president of the Berkeley Civic Arts Commission, created to pursue city planning activities, McDuffie spearheaded the creation of Berkeley’s first districting ordinance on March 10, 1916 [1]. While based on LA’s 1908 law, the Berkeley ordinance also pioneered the creation of zones restricted to single family residences. The zoning ordinance was rapidly deployed to close down or prevent the establishment of East Asian and Black businesses, and was used to reinforce racial segregation.

Marc Weiss writes in “Urban Land Developers and the Origins of Zoning Laws: The Case of Berkeley” [1]: “That the focus of Berkeley’s zoning law should be on racial restrictions is not surprising given the anti-Chinese origins of zoning in California… In 1925 and 1926 the California Real Estate magazine reported that one of the most popular examples of ‘service rendered’ by a local real estate board ‘to members and to the community at large’ was the attempt by the Berkeley Realty Board, a strong supporter of city planning and zoning, ‘to organize a district of some twenty blocks under the covenant plan as protection against invasion of Negroes and Asiatics.’”

The result of restricted covenants and zoning laws was that “almost all Asian and Black Berkeleyans lived south of Dwight Way and west of Grove Street,” Charles Wollenberg writes in Berkeley: A City in History.

In 1933, Franklin Roosevelt created the Home Owners’ Loan Corporation (HOLC) to offer affordable mortgages as part of the New Deal. The HOLC created “security maps” to help banks assess the risks of lending, based on the location of the home. These maps divided cities into grades from “A” (green, the best areas) through to “D” (red, hazardous areas). These maps were used to legally discriminate against ethnic and racial minorities, a practice known as “redlining”.

Loans were denied to people in non-white communities since their neighborhoods were listed as grades C and D, and thus such loans were classified as being at a high risk of default. The Federal Housing Administration (FHA) created an Underwriting Manual which said that “incompatible racial groups should not be permitted to live in the same communities,” since based on the logic of the HOLC’s classification system, “infiltration” of non-white homeowners would result in down-grading of the area. This prevented loans to non-white people wanting to buy in A or B zones from being insured, effectively excluding them from these zones. Further, HOLC/FHA borrowers could not get aid or a mortgage guarantee without having a race-restrictive covenant on their home or covering their neighborhood, perpetuating housing segregation.

The 1937 security map for Oakland and Berkeley is shown below. (source: [6], full size) 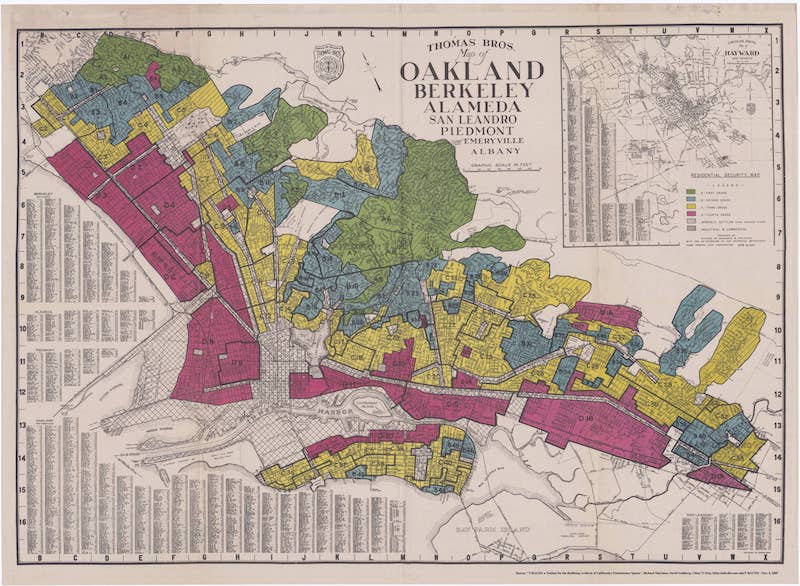 The enforcement of restrictive covenants and zoning laws pioneered by McDuffie and his allies was so effective that the North Berkeley Hills area, along with the Claremont area also developed by Mason and McDuffie, were listed as grade A. In the accompanying description for area A-1, the zone in which the Berkeley Heights development is listed, the clarifying remarks (written on August 26, 1937) read as follows: “This section is known as Arlington Heights, Thousand Oaks Heights and North Cragmont and is one of the most active residential districts of the East Bay Area. A great amount of federal housing money has been used in financing homes in this area… Zoned first residential, single family, deed restrictions prohibit Asiatics and Negroes.” The form notes that no Black people live in this zone.

While the Supreme Court ruled in 1948 that restrictive covenants were unenforceable, redlining continued. In January of 1963 the Berkeley City Council “passed an anti-segregation law that included criminal penalties for those guilty of housing discrimination – one of the first efforts of its kind. However, the opposition was tremendous. Within months, residents opposed to the new law had gathered enough signatures to place a referendum on the April ballot. Tensions ran so high that three Berkeley High students set a cross on fire on the lawn of Fred Stripps, a liberal mayoral candidate who opposed the referendum. There was a record turnout of voters — one account said 82% of Berkeley voters went to the polls — and the law was repealed. The fair housing law was rescinded on the grounds that the anti-segregation law violated basic property rights and had communist influences, according to Wollenberg… [who] writes that one supporter of the referendum said that it was ‘A plot to Congo-lize our city.’ A Thousand Oaks realtor said, ‘The day I have to sell to a Negro and ruin this fine district, I’ll close up and get out of the real estate business.’” [4]

While the Fair Housing Act (Title VII of the Civil Rights Act of 1968) outlaws housing discrimination, the effects of housing discrimination are still visible: “Those areas that were labeled desirable on the HOLC maps remain the most sought-after real estate in Berkeley, the wealthiest, and the whitest. Berkeley’s distinctive distribution of real estate value, in part created through the systematically racist local and national housing policy in the 20th century, is much the same today.” [4]

The history of this discrimination is also visible in the stone pillars that mark out the whites-only Mason-McDuffie developments. [5]

What you can do:

With thanks to Darrell Owens for his advocacy work on housing discrimination in Berkeley, and Corrina Gould, Traditional Spokesperson and Tribal Chair of the Confederated Villages of Lisjan.